Australian cricketer David Warner has been entertaining fans with TikTok videos on Bollywood songs during the lockdown. In the latest video, he was seen shaking a leg on Akshay Kumar‘s popular song Bala from the film Housefull 4. The cricketer has broken the internet with his videos in which he is seen dancing to Indian songs. From Allu Arjun’s Ramuloo Ramulaa and Butta Bomma to Katrina Kaif‘s Sheila Ki Jawaani, he has been on fire.

In a recent video, David Warner impressed the netizens with his swag on Bala song and wrote, “I think I’ve got you covered @akshaykumar #bala #fun #friday #challenge” Reacting to the video, Akshay Kumar wrote, “Absolutely! Nailed it.” Check out- 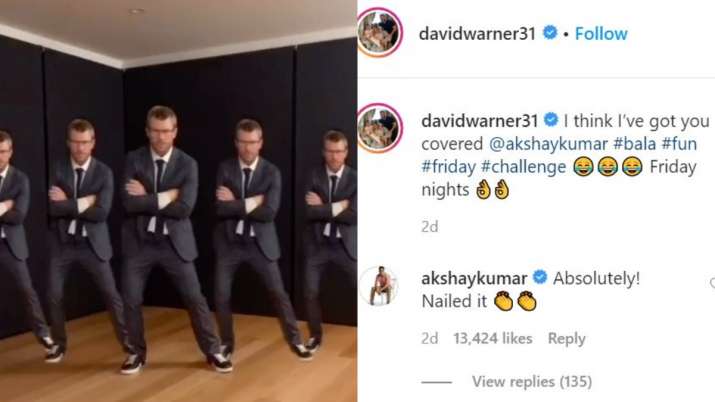 Not just David Warner, Indian skipper Virat Kohli also commented on the viral video. Kohli comments with laughing emojis to which Warner made a request to him, asking him to join in for a duet. he wrote, “You’re next bro come on man a duet. Your wife will set you up an account.”

On a related note, Akshay Kumar has been significantly active in providing help to the corona warriors in the battle against COVID-19. Recently, he donated about 1000 wrist bands to Mumbai police to detect coronavirus symptoms. The bands will help detect symptoms like blood pressure, heart rate, sleep and will also keep a check on step count and calories. It will also detect if the temperature of a person is higher than normal or not.

Also, Akshay Kumar also paid tribute to all the healthcare officials who have been in the frontline of the pandemic by a special version of his song Teri Mitti from the film Kesari. He shared the song saying, “Heard that doctors are a form of God but during this battle against coronavirus, I have surely witnessed it.”

On the work front, Akshay Kumar has many interesting films in the pipeline. He will be seen in Rohit Shetty‘s Sooryavanshi alongside Katrina Kaif, Farhan Samji’s Bachchan Pandey, Raghava Lawrence’s Laxmmi Bomb and Ranjit M Tewari’s Bell Bottom.

For all latest news and updates, stay tuned to our Facebook page

The first day of June saw coronavirus restrictions ease from Asia to Europe on Monday, even as US protests against police brutality sparked...
Read more

As Trains Resume, Migrant Workers Line Up With Tickets And Nothing More

Number of beds with oxygen supply facility will soon be enhanced to 14,000. (Representational)Indore: The Madhya Pradesh government has readied 60,000 beds in...
Read more

The first day of June saw coronavirus restrictions ease from Asia to Europe on Monday, even as US protests against police brutality sparked fears of new outbreaks.The Colosseum opened its ancienAssociated presst doors...

As Trains Resume, Migrant Workers Line Up With Tickets And Nothing More

Number of beds with oxygen supply facility will soon be enhanced to 14,000. (Representational)Indore: The Madhya Pradesh government has readied 60,000 beds in...
Read more

A select group of 13 Sri Lanka cricketers, mainly bowlers, resumed training which is being overseen by a coaching and support staff of...
Read more

Italian media are reporting that the football federation could discuss the possibility of increasing that number and permitting a vastly reduced number of...
Read more

Watch: How To Make Reeses-Style Peanut Butter Cups At Home

Raise your hand if you are someone who has mastered the art of cooking during this stay-at-home phase! There's no doubt that cooking...
Read more

Lockdown Cooking Tips: How To Make Tortilla Wraps At Home With This Easy Recipe

Summer Diet: How To Make Maharashtrian-Style Raw Mango And Onion Pickle For A Sweet-N-Sour Side Dish

HighlightsPickle-making is a tradition that has a legacy of its ownHomemade pickle is known to have several health benefitsThis Maharashtrian-style raw mango pickle...
Read more

Oppo is working on the successor of the Reno 3 series, and we have already seen multiple leaks featuring phones from the upcoming...
Read more

Acer Swift 3 has made its India debut and the Taiwanese manufacturer claims it is the first laptop to be powered by...
Read more

Google has rejected demands it pay hundreds of millions of dollars per year in compensation to Australian news media under a government-imposed revenue...
Read more

The first day of June saw coronavirus restrictions ease from Asia to Europe on Monday, even as US protests against police brutality sparked...
Read more

A total of 75 bodies out of 97 people killed in the plane crash in Karachi last month have been identified so far...
Read more

US Secretary of State Mike Pompeo has accused China of using a "tactical situation" on the ground to its advantage and threatening others,...
Read more

George Floyd Killing: Use of force criticised in protests about police brutality