Bhumi Pednekar calls Amitabh Bachchan ‘baller’ once again, Big B is eager to know the meaning

Amitabh Bachchan recently shared a picture collage of himself from his 1976 film Kabhie Kabhie, and a snippet of his look from his upcoming film Gulabo Sitabo. The then Vs now picture created much buzz but it was Bhumi Pednekars ‘baller’ comment that has stolen the show once again. The Saand Ki Aankh actress lauded the veterana actor and commented, ‘”44 years later and still giving us such memorable characters…I’m telling you you’re the most baller person ever,” The use of the word ‘baller’ left Amitabh confused. He replied to her comment saying, “Arre…Bhumi…what is ‘baller’??? Kab se pooch rahe hai, koi bata hi nahi raha (I have been asking for a long time but no one is answering me).” 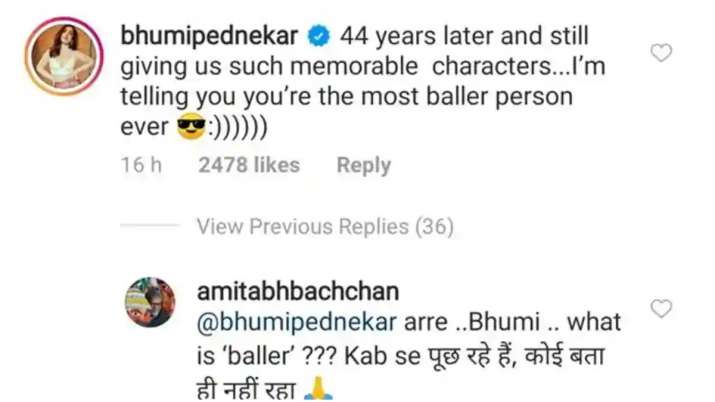 Earlier, Bhumi used the expression was when Big B shared a selfie with his grandson, Shweta Bachchan Nanda’s son Agastya recently. Commenting on his post, Bhumi Pednekar had complimented him, saying: “You’re a baller sir.”

Meanwhile, Bollywood veteran Amitabh Bachchan’s upcoming film Gulabo Sitabo, directed by Shoojit Sircar, is all set to release on OTT platform on June 12. The film features Andhadhun actor Ayushmann Khurrana along with him who plays the role of the tenant who is always at crossroads with his landlord, played by Bachchan. The movie will have its digital premiere on Amazon Prime Video.

Bhumi Pednekar will be next seen in ‘Mr Lele’ along with Varun Dhawan and Abhishek Banerjee. She will also be part of periodical drama ‘Takht’ co-starring Vicky Kaushal, Ranveer Singh, Kareena Kapoor Khan, Janhvi Kapoor, Alia Bhatt and Anil Kapoor in pivotal roles.

Surinder Kapoor was an Indian film producer. He produced Bollywood films and also served as President of the Film and...
Read more

The national crush of 2020, actress Rashmika Mandanna is all set to make her Bollywood debut. The actress on Wednesday...
Read more

The Christopher Nolan-directed Tenet, starring Robert Pattinson, John David Washington and Dimple Kapadia, has emerged as the most watched film in India post lockdown. According to #ShowOffTheYear2020 report by BookMyShow,...

Breaking News Night Curfew In Karnataka From 10 PM To 6 AM Until January 2Amid global fears over the new strain of coronavirus, a...
Read more
Delhi
smoke
0 %
Thu
Fri
Sat
Sun

It wasn't me: David Warner's wife Candice sees the funny side of Australia opener's groin injury

Earlier, the ECB had said that they had sustained losses of over $130 million in the last financial year due to the suspension...
Read more

Surinder Kapoor was an Indian film producer. He produced Bollywood films and also served as President of the Film and...
Read more

The national crush of 2020, actress Rashmika Mandanna is all set to make her Bollywood debut. The actress on Wednesday...
Read more

Chettinad chicken rasam is a mouth-watering treat that is sure to comfort your soul.HighlightsRasam is the ultimate comfort food for many South IndiansIt...
Read more

The period of lockdown has got us experimenting with cooking. There are a variety of dishes and cuisines that we have tried making...
Read more

Christmas 2020: Make Gingerbread Cookies With This Easy Recipe And Thank Us Later

HighlightsChristmas is all about indulging in good foodThere are so many traditional delicacies we are looking forward toGingerbread cookies are very easy to...
Read more

HighlightsBengali food is replete with fish curriesBengali cuisine is also known for its rich and experimental flavoursChingri malai curry is a soothing curryIf...
Read more

Huawei Nova 8 specifications have been leaked by a major telco ahead of its launch in China later in the day. As per...
Read more

The Indian Federation of App-based Transport Workers (IFAT), along with an alliance of labour unions and civil society organisations concerned about the...
Read more

Realme Watch S, Realme Watch S Pro have launched as the latest wearable offerings from the company. The two wearables come with a...
Read more

How to slaughter animals for food, a raging debate in Europe over Belgian law

How to slaughter animals for food, a raging debate in Europe over Belgian law Source link
Read more